Do you have a problem starting your meetings on time? Do people just seem to roll into the room well after a meeting begins without any particular concern as to the consequences of arriving late?

I have this same problem when I teach classes. My classes have a well-defined start time and a well-defined end time. I believe it is rude of me to not end a class on time, and likewise I believe it is rude to the other class attendees who arrived on time to start a class after the designated start time. In an attempt to motivate people to be on time, I have tried a number of techniques, including two forms of extrinsic motivation: bribes and penalties. Neither of these approaches has worked reliably for me. In this posting I will describe the only approach that has worked reasonably well for me: intrinsic motivation.

But first, let me dispense with bribes and penalties.

Years ago I used to bring donuts to both meetings and to my training classes in the hope that people would be on time to get a tasty treat. Although this extrinsic motivation approach might work for some people some of the time, it rarely was motivating enough to ensure people would arrive prior to the start time.

My general impression is that bribes don’t work for a variety of reasons. First, not all people are interested in the bribe. (Not everyone likes donuts! I know, crazy, right?) I could, and have, tried other bribes, but nothing has true universal appeal. Second, the bribe would never be sufficient or large enough for everyone. People have different thresholds. Perhaps if I had offered a year’s supply of donuts that would have motivated some people uninterested in the single donut bribe. Third, some people find the bribe insulting. One person actually asked me if I thought they were children and needed to be bribed to show up on time. I am sure you can add many other reasons why bribes are not an effective strategy for getting people to arrive on time.

The opposite of the bribe is the penalty, another form of extrinsic motivation. For example, years ago I used to place an empty container on my table at the front of the class and told people if they arrived late after we took a break during the class, they would have to put $1 in the container before taking their seat. At the end of the class we would donate the money to a local charity or would hold on to it to help fund an internal event, such as a Friday afternoon team get together.  This type of penalty would sometimes work.

Once in a classroom after I announced this policy a guy in the back of the room stood up, walked to the front of the classroom, took out his wallet, removed a $10 bill and tossed it into the container! He then said: “Buddy, I’m just paying in advance. I’ll probably be late after each break so let me pay now with interest so you won’t hassle me when it happens.”

This both surprised me and annoyed me. I told him, please take back your money. I then changed the policy and stated that if someone comes back late from a break, he will have to stand at the front of the room and sing any song he wants in any language he wants before he can sit down. For that particular class and a couple that followed, that policy actually seemed to work well – I could see people running down the hallway to get back from break before the door was closed. One person who didn’t make it back before the door shut was an ex-college football player. He ended up signing a rousing rendition of “I’m a Little Teapot.”

Penalties, however, really don’t work. I actually stopped using the singing penalty within a few classes after I ended up teaching a class in Nashville. At the start of that class I announced the policy: “If anyone comes back late from a break you will have to sing a song before you can return to your seat!” After I made my pronouncement I saw a lady in the front row shaking her head from side to side and waving her finger as well. She then said, “You can’t do that in Nashville, people will come back late on purpose carrying guitars! You just guaranteed them an audience! People in Nashville will take you up on that!”  So, I gave up on the singing penalty.

A fascinating study by Uri Gneezy and Aldo Rustichini tested the concept of a deterrence hypothesis – which predicts that given all other variables are equal, the introduction of a penalty will reduce the occurrence of the behavior. Gneezy and Rustichini studied parents who picked up their kids late at daycare centers in Haifa, Israel. The initial study just counted how often parents would show-up late, which turned out to be on average about eight times per week per daycare center. Parents who arrived late to collect their children forced a teacher to stay after closing time and possibly be late to their own family. The initial overall late pickup rate wasn’t excessive since parents felt a moral obligation to be on time and didn’t want to exploit the generosity of the teachers.

In the second part of the study, a subset of the daycare centers (the non-control group) introduced a fine of $3/child if a parent arrived more than 10 minutes late (the average cost for after school care was $380/month). Immediately after the penalty was introduced, the number of late-coming parents increased significantly to an average of 20 late pickups per week (see the following graph). 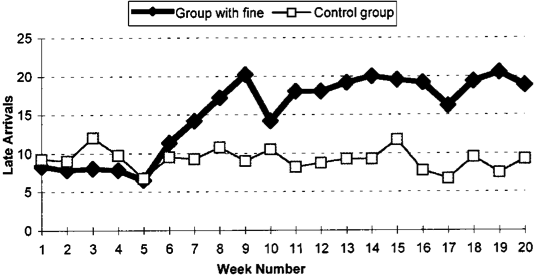 And, even more surprisingly, after the fine was removed no reduction in late pickups occurred! A new norm had been established. By the way, the authors admit that it is quite possible that no parent would come late if a very large fine were involved! But, of course, parents might choose to not use the daycare center at all if there were a risk of a significant penalty.

So there is at least some academic research that indicates that not only do penalties fail to deter unwanted behavior, but they also can have quite the opposite effect: penalties often make things worse! Do you think in your company that charging people a fine if they arrive late to a meeting would actually reduce the rate of tardiness?

Intrinsic motivation is something that comes from within and can be as simple as the joy one feels after accomplishing a challenging task. Soon after receiving my bachelor’s degree from Georgia Tech, I took a job with ParcPlace Systems. ParcPlace was a start-up company formed as a Xerox PARC spin-off, whose charter was to bring object-oriented technology out of the research labs and release it to the world. We were on a mission to be the first company to make object-oriented technology mainstream. I recall working 80 hours or more each week for the first two to three years I was at ParcPlace. Nobody asked me to work that much, and there were no bribes if I did and no penalties if I didn’t. I just wanted to; I was intrinsically motivated.

The policy that I have adopted for being on time for meetings assumes that people are intrinsically motivated to be on time. In my classrooms, I announce when the break starts how long the break will last—say 15 minutes. I set a timer on my phone for 15 minutes and when the timer goes off I stand up and restart the training. So, my policy is that I will always start on time. And, I will never back up. So, if someone comes back 20 minutes late from a break and realizes that she just missed the discussion on the most important topic to her, then the onus is on her.

My attitude is that everyone in the class is an adult and a professional. They don’t need me to tell them how to allocate their time. If they have something more important to attend to rather than showing up on time after a break, they don’t need me to make that decision for them. However, if they show up late I will not back up and repeat what was already discussed. That would be unfair to both the people who were on time and to me. So, people will either be intrinsically motivated to be on time or they won’t. They might be highly motivated to be on time and some unexpected event prevents them from being on time.  Yep, that can happen and it doesn’t change my policy; always start on time and don’t back up.

You will need to decide in your organization how you want to handle meeting tardiness. I have concluded that I am unable to make bribes and penalties work in a reasonable and reliable way. Instead I rely on the fact that people are adults and professionals and should have the proper intrinsic motivation to be on time. If people don’t show up on time, I assume they must have something more important to them to attend to.  Or perhaps organizationally we haven’t established an environment that helps people become intrinsically motivated to accomplish the things that are important to the organization.