After years of training it is clear to me that many people do much better with pictures than they do with text. I myself am a visual learner, which is why in my presentations I shun bullet points in favor of graphics that help most people understand and retain the concepts.

With that in mind, a number of years ago I decided to design a new visual icon language so I could compose a consistent set of graphics to visually represent core agile and Scrum concepts and their applications in the Scrum framework. The end result is the Visual AGILExicon® (pronounced visual agile lexicon), that I use in all of my training materials and in my Essential Scrum book. In this blog I want to give you the keys to interpreting the graphics in the Visual AGILExicon in case you decide to use them in your own presentations (Yes, that’s right. You can download the graphics free of charge! Get the details here.)

The Visual AGILExicon is comprised of about 40 four-color icons for composing powerful, three-dimensional graphical representations of foundational agile and Scrum concepts, including roles (such as ScrumMaster, product owner, and development team), artifacts (such as product backlog and potentially shippable product increment), and activities (such as sprint planning and sprint review). These core icons can also be combined to create approximately 70 pictures that represent more sophisticated concepts such as the complete Scrum framework (that I will use as my example in this post), portfolio planning, and product backlog grooming activities.

Scrum at a Glance

To illustrate the beauty and the power of the Visual AGILExicon, let me describe how its elements are used to create perhaps the most important image, the Scrum framework overview. 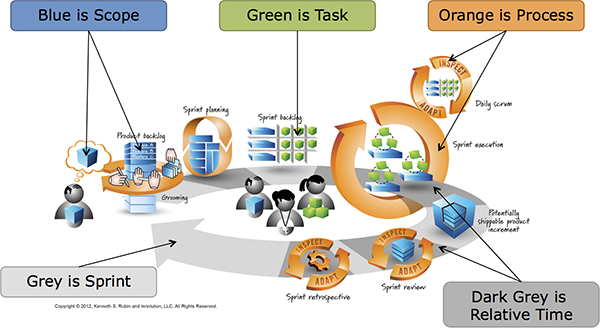 Let me begin by describing the role of colors in the Visual AGILExicon:

These colors remain consistent throughout the Visual AGILExicon. Remember this Scrum Framework overview picture (Figure 2.3 in my Essential Scrum book) is just one of over 70 composite images that are part of the Visual AGILExicon, and this image is itself composed of a reusable set of over forty icons (all of which are available for you to use).

So, let’s now walk through the Visual AGILExicon’s graphical depiction of the Scrum Framework to better understand the power of this visual language.

The blue bricks near the top of the product backlog—the high-priority PBIs—are smaller and darker blue, representing product backlog items (scope) that are in a state I call ready. You can read more about what it means for a PBI to be ready in the blog post “Definition of Ready.”

The blue bricks at the bottom of the product backlog, on the other hand, are lower in priority, so these PBIs can be bigger and less detailed. As such, they are represented as larger and lighter blue bricks (not ready to be moved into a sprint).

These activities happen continuously, as the team and the product owner learn more about the product being developed. The product owner and team work together regularly to add new PBIs, break down high-priority PBIs into smaller, more detailed PBIs, discard unnecessary PBIs, estimate (or re-estimate) PBIs, and sort (or re-sort) the PBIs in priority order.

As you examine the Scrum framework picture you will see a large, grey looping arrow that dominates the foundation of this picture beginning at the product backlog and moving underneath or through all of the remaining icons. This arrow represents the sprint, a fixed-length, timeboxed iteration of one week to one month in duration, during which time the team plans, begins, refines, and completes a specific set of potentially shippable product functionality, then inspects and adapts both the product and the process before beginning the next sprint.

Also notice that in the grey sprint arrow surrounds an icon composed of three “people.” This icon is meant to represent the Scrum team, which includes the product owner, ScrumMaster and the development team roles. We’ve already met the product owner—that’s the guy with the comb over holding the blue cube. The ScrumMaster is the lady wearing the coach’s whistle; and the third icon is for the development team. In this visual representation, the development team is depicted as a lady with a collection of green cubes (which represent tasks – to be discussed shortly). In other images in the Visual AGILExicon the team is depicted as a collection of people (see image below). 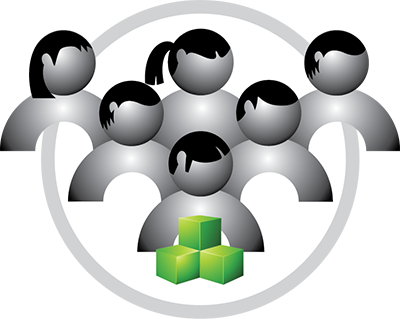 The placement of this Scrum team icon is meant to convey that the entire Scrum team is involved or invited to each activity that takes place within the sprint. (For a closer look at who should be at each sprint meeting, I refer you to the blog post, “Who Should Attend Scrum Meetings?”)

Let’s continue our visual walk around the Scrum framework.

The icon to the right of the product backlog represents sprint planning – visually depicted as two connected orange arrows. The visual metaphor is that those two connected arrows bound a capacity – the team’s capacity to do work this sprint. The goal of sprint planning is for the development team to pull high-priority ready items (small dark blue bricks) from the product backlog. The items that are pulled by the team represent the work that the team believes it can accomplish this sprint.

Notice that pulled blue bricks don’t completely fill-up the space bounded by the two orange arrows. In other words, the pulled blue bricks occupy most, but not all, of the team's capacity. The unoccupied space in the icon is a visual representation of the buffer that the team should leave uncommitted to account for unpredictable events. The exact size of that buffer will differ from team to team and from organization to organization.

Sprint planning is the first activity in every sprint. It is timeboxed to 4-8 hours depending on the length of the sprint itself. That amount of time is visually represented by the darker grey area on the sprint arrow directly below the sprint planning icon.

The sprint backlog is the next icon we come to in the Scrum framework graphic. The members of the development team often create a sprint backlog as a means of acquiring confidence that the commitment the development team is making during sprint planning is a reasonable one (you can read more about this concept in the blog, “Sprint Backlog: An Artifact for Acquiring Confidence.”)

Let me explain the sprint backlog icon. It looks like a table with blue bricks and green cubes. We know that blue bricks are product backlog items, and in the sprint backlog, the blue bricks are the specific PBIs that were pulled into the sprint during sprint planning. Green cubes represent tasks (e.g., design, build, test, and integrate work). The visual metaphor is that each blue brick is broken down into a collection of green tasks. Teams break PBIs into tasks to understand the work involved in completing a given PBI—and ultimately how many and which PBIs the team feels confident it can complete during the sprint, given the team’s capacity.

The next icon in the graphic represents sprint execution, a term I use to refer to the period of time during which the team is doing design, build, test, and integrate work. In graphical terms, the team members are doing the green cube work that makes up each blue brick in order to complete the PBIs the team committed to during sprint planning. 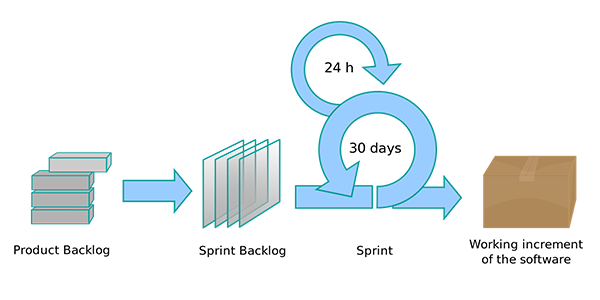 Just after the sprint execution icon is the icon for the potentially shippable product increment. The visual metaphor for this icon captures the idea that, by the end of the current sprint, the development team has completed a piece of the larger vision (a piece of the larger blue cube). That piece (typically several product backlog items – shown as blue bricks inside the larger blue cube) needs to be done to the Scrum team’s agreed upon definition of done. Potentially shippable does not mean you actually have to ship, deploy, or release it. Shipping something is a business decision, so it ought to be based on business factors. Potentially shippable is better thought of as a state of confidence: how confident are you that if shipping something were the right thing to do at the end of this sprint, we could do it.

Browse or License the Visual AGILExicon®

These pictures, which I created for my book Essential Scrum (and which are available to license and download), were a joint venture between me and a fantastic graphics artist named Jeff Schaich. The development of the language was very iterative. I would describe the concept of what I was trying to achieve and Jeff would come up with visual ideas for how to represent those concepts. I would then select candidate ideas and we would iterate designs.

As with any reusable asset, I needed to keep iterating until we had used each icon in several compositional pictures to know whether or not the icon we had conceived was useful and reusable. I was leveraging an old adage from my Smalltalk days: “You don’t know that something is reusable until you have actually reused it several times. And, be prepared to build it at least three times before you have something that is reusable.” That is pretty much how it went with the icon-language design.

In truth, I invested an enormous amount of time in creating the Visual AGILExicon for use in my book and presentations. I think that in the three years it took to write and edit Essential Scrum perhaps as much as 50 percent of the overall effort went into the creation and refinement of the images. And it was worth it. To me the book would be a mere shadow of itself if it did not include the over 200 pictures that it has. As I mentioned, any agile practitioner can get a no-cost license to use the four-color* Visual AGILExicon images in their own presentations or on their intranets (use of the images on public websites or videos is not permitted without a special license). To learn more about the Visual AGILExicon visit: http://www.innolution.com/resources/val-home-page.

I hope you find the Visual AGILExicon® helpful in understanding Scrum and in explaining it to others. Also, if you want to get a more complete description of the Scrum framework picture that I used in this post, you can read Chapter 2 of Essential Scrum. You can download a free copy of that chapter by signing up for my Newsletter!

* Quick note: There are also two-color versions of each Visual AGILExicon image that I use in my Essential Scrum book (the book is published in two colors not four colors). However, the images I make available for people to use are the visually more appealing four-color versions.