Scrum teams are essential assets of a Scrum organization. How Scrum teams are structured and relate to one another can significantly affect an organization’s success with Scrum. In this chapter I discuss different ways to structure Scrum teams. I begin by discussing the distinction between a feature team and a component team. I then focus on the issue of coordinating multiple, collaborating Scrum teams.

If you have just one small project, you don't need to worry much about Scrum team structures. Just create one cross-functional team, using the characteristics I described in the previous chapter, “Scrum Teams,” and make sure to properly fill the ScrumMaster and product owner roles.

Scrum team structures become much more important when you need to coordinate the work of multiple Scrum teams whose combined effort is required to deliver increasingly greater business value. You want to structure your teams so that they are high performing and well coordinated. The first question you might ask is whether you should create feature teams or component teams.

For a more complete understanding of feature teams versus component teams, read my blog post, Distinguishing Between Feature and Component Teams.

Scrum favors feature teams. Unfortunately, many organizations prefer component teams, often because they believe that a team of trusted experts will make safer and more effective changes to the parts of the code that they own. These organizations recognize that cross-functional teams are a better choice for minimizing dependencies and handoffs, but they are more concerned about the risk of chaotic development and maintenance of reusable components with large amounts of technical debt.

One solution is to create well-formed feature teams that, over time, share code ownership and collectively become trusted custodians of the code. This transitory approach to a multi-feature-team model with full shared code ownership is shown in the image below. 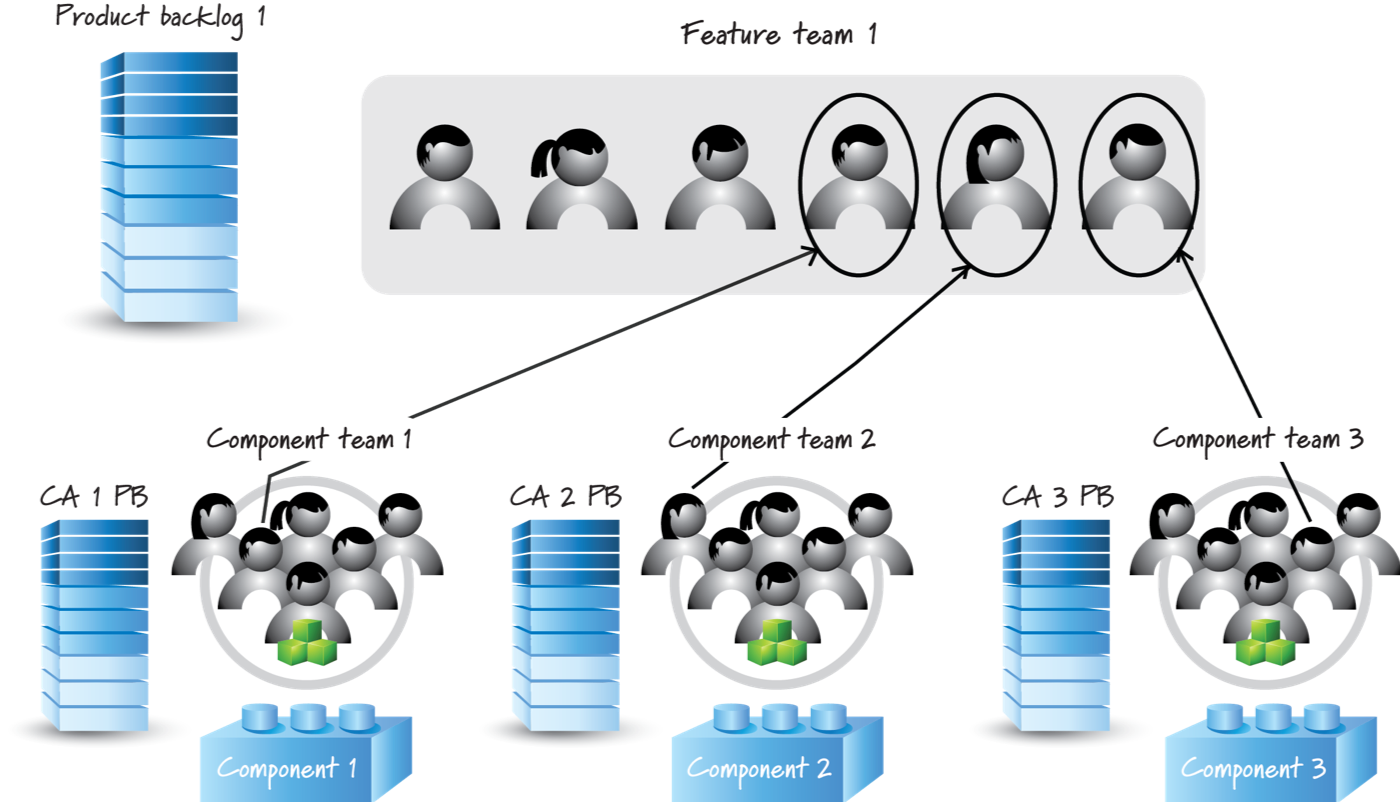 There are some nuances to doing this at scale, which is where multi-team coordination and release trains come in. I also recommend reading my blog post, Restructuring Teams to do Agile at Scale: The Fallacy of Magical Thinking.

When scaling Scrum, you don't want to have increasingly larger development teams. You want to have multiple right-sized Scrum teams. The trick is how to coordinate among those teams. Two agile scaling techniques I find particularly useful are the scrum of scrums and the release train.

Participants at the scrum of scrums answer similar questions to the ones answered at the daily scrum:

In theory, the scrum of scrums can be scaled to multiple levels, with multiple scrums of scrum of scrums (more easily called program-level scrums) and the like. When scaling beyond a scrum of scrums, some organizations find the release train approach helpful.

An agile release train is an approach to aligning the vision, planning, and interdependencies of many teams by providing cross-team synchronization based on a common cadence. A release train focuses on fast, flexible flow at the level of a larger product.

The idea is that the features need to “leave the station” on a published schedule. All of the teams participating in the development of the product need to get their “cargo” onto the train at the appointed time. The release train always departs on time and waits for no one. Likewise, if a team misses the train, it need not fret because there will always be another train departing at a known time in the future.

The release train image above shows nine teams clustered into three feature areas. After an initial whole-train release planning meeting, each team within a feature area performs its own sprint, drawing work from its associated feature-area backlog. Using a technique like scrum of scrums, all other teams within a feature area coordinate and integrate their work each sprint.

As often as is practical, there should be system-wide integration and testing across the feature areas. The durations of all sprints for teams participating in the release train are identical, and all sprints are aligned. The result is that sprints of every team start and end on the same dates. After a fixed number of sprints, a potentially shippable increment—PSI— is available. At each PSI, the organization can choose to deploy a PSI to its customers or to instead confirm that the work performed within the individual feature areas has been integrated and tested across the feature areas, and to solicit an internal review.

This chapter was concerned with Scrum team structures. The next chapter will discuss the role of managers in Scrum.

You might find it helpful to look at the slide ins Scrum feature teams versus component teams presentation from Ken Rubin.

And if you want more in-person help with your Scrum team strutures, consider agile coaching or whole-team Scrum training from Ken Rubin.