This is part one in a series of blog posts derived from a one-hour Q&A session I had with University of Alabama students who were using my Essential Scrum book as the core of their course curriculum.

One of the things I’m most proud of is that my book, Essential Scrum, is increasingly being used as a textbook in university classrooms around the world. I can’t begin to explain how exciting it is to know that I am part of introducing the next generation to agile principles and the Scrum process. 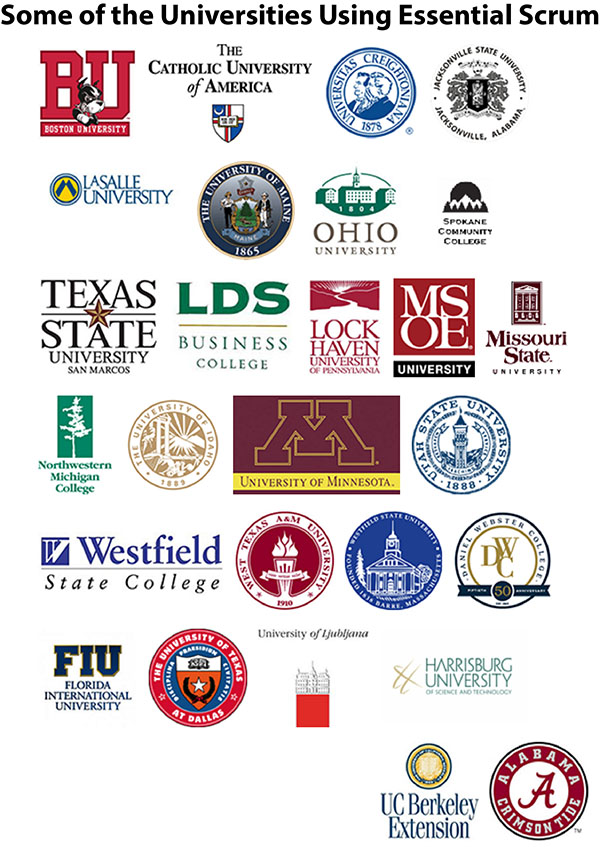 On May 12, 2016 I was invited to have a discussion with one such group of students, the “MIS-560 Enterprise Integration Methods” class at the University of Alabama. Industry veterans Ron Norman and Jeff Lucas teach this short-duration, graduate-level “boot camp” class and use Essential Scrum as the text. My discussion with the students took place early in the course, so they were only a few chapters into the book, but they already had some thought-provoking questions for me—it took over an hour to answer them all!

I am sharing these questions and my answers in a series of blog posts. I feel these are particularly apropos because lately, my industry classes include a growing population of younger participants (recent graduates and college interns). This is a shift from 10 years ago when I would encounter almost exclusively longer-term (i.e., older!) employees.

What’s the next generation of agile leaders wondering about? First and foremost, they’re wondering how non-agile companies learn to adopt Scrum—and whether there are certain organizations that shouldn’t try (at least not yet).

In your book you mention that back in 2000 you arrived at Genomica and led an agile transformation effort during a time of crisis and upheaval. How did you help a team like that embrace agile?

This question is about my time at the bioinformatics company Genomica, in Boulder, CO. I have often said that Genomica survived by being no worse than its competitors. That is a nice way of saying it wasn’t a very good company. It had a horrible culture that was set in motion by the initial senior executives. The VP of Engineering (who I eventually replaced) was part of that culture. His attitude was essentially, “It’s better not to lose than to win.” So, he made (or frequently didn’t make) each decision based on how to avoid being wrong rather than how to win! I am sure you can appreciate that not being wrong and winning are quite different. The team followed his lead.

When I arrived in at Genomica, I found that most people were afraid of being wrong and at the same time were strangely self-entitled. This combination made it difficult for this particular group of people to adopt agile immediately—so difficult in fact, that my leadership team and I decided it would be fruitless to try and talk them into it. Instead, we decided to show them what a culture of winning looked like. To demonstrate, we started a skunkworks team in Sacramento, California and spun up Scrum in that small group. It soon became apparent to the folks in Boulder that the team in Sacramento was crushing it. Suddenly the “old guard” was much more interested in changing, and more amenable to embracing the new way of working that came with adopting Scrum. I suppose you could say that our basic strategy for transitioning was: “Success breeds success.”

Have you ever advised A company not to switch to agile?

Absolutely! Here are two examples of times I have told companies that they were not ready for agile or Scrum. Years ago, I was teaching a class at a company that was experiencing turbulence. I remember putting up a slide during the Scrum training class that contained words like trust, safety, sharing, etc. When it appeared on the screen, I could hear people laughing, even before I began talking. I stopped and asked them what was so funny. They said, “You can’t assume any of those things here. We do layoffs once a month. There is no safety; there is no sharing. If I have the information and you don’t, then next month when they do a layoff you’ll get let go and I’ll still have a job.”

I think my reply was “Why am I here teaching this class?” This company had a toxic culture and clearly needed much more than a Scrum class.

The second example was a well-known Canadian company that had lost a significant part of its market share and had no clear strategic goal for how it would regain it. They asked me to come and teach a class. After speaking with the VP and learning more about the current state of the organization, I basically told the VP that there was nothing I could do at the level they would be bringing me in that will materially affect the company. I went on to explain that I also was not the proper person to help their company come up with a new strategic direction in their field of expertise. The VP appreciated my candor, and when he left that company six months later and took a job with a company in San Francisco, he brought me in to his new company to do training and coaching.

The best advice I can give you as you begin your career is to always be honest, with yourself and with others. Sometimes you—and Scrum—cannot address profound organizational issues in deteriorating companies. Many companies need to back up and attempt to fix bigger organizational or cultural problems before Scrum can be of any help to them.

It is easier or harder to teach Scrum in a small company versus a larger company? Does agile even make sense for startups?

You’d likely imagine it would be easier to teach in small companies, but I’m not sure that’s true, at least for me. Perhaps I feel that way because most of the companies that I work with are large or very large companies. Based on my long experience in dealing with larger companies, it is probably slightly easier for me to teach at larger companies.

Occasionally I will do work with smaller companies of 100 to 300 people. I have noticed that at smaller companies people are more likely to wonder why they need anything other than ad hoc development. Take the case of six people at a startup in someone’s garage. In this situation, any type of process formality might seem like a burden.

That doesn’t mean that agile can’t be used at startups. My wife and I are angel investors in Seed Stage technology companies. I evaluate each company we meet from the perspective of how well the entrepreneurs internalize core agile principles to run their businesses, similar to Lean Startup. I plan to do a blog post on Scrum in Startups in the near future.

You mentioned you often work with larger organizations. Is HR a common roadblock for big companies doing agile?

Note: This question was asked by one the instructors, who was also a consultant for 20 years.

Absolutely. Misalignment with HR on core agile principles is an inhibitor to the success of companies applying agile development methodologies such as Scrum. I’ve written two blog posts that reinforce this point.

Next in the Q&A with University Scrum Students’ Series

In the next blog in this series, I’ll attempt to put on my fortune-teller hat and address questions about the future of Scrum and agile.