When considering your own organization ask yourself this question: “Are you working on too many projects at the same time?” If you are similar to most organizations that I visit, your answer will be a resounding yes! I’m having a hard time remembering the last time that I encountered a company whose answer to that question was: “No, we are working on the ideal number of projects! I couldn’t imagine a better number of projects to work on than what we are doing now – not too many and not too few!”

Most companies would probably acknowledge working on too many projects at one time is a bad thing. However the argument for limiting what we work on is so counter-intuitive that most people will simply dismiss it. In this blog I introduce a compelling argument for limiting WiP, including an eye-opening exercise geared to help people appreciate why a seemingly counter-intuitive argument is correct and should not be dismissed.

In this posting I am using the term project as the catchall phrase for projects, products, services, work streams, value streams, etc. Also, since I use the term WiP (work in process) in this posting, let me define it: projects that are started but not finished.

The Problem of Too Much WiP – An Example

The problem with working on too many projects (having too much WiP) is that it simultaneously slows down the work on all projects and reduces quality (due to extensive multi-tasking) while potentially burning out the development team members.

In my classes I frequently do a common exercise called Calligraphy to help illustrate the issue of too much WiP. I was first introduced to this exercise by Henrik Kniberg. Here are the basics. Students form teams of five to six people per team. Each team opens a Calligraphy store whose business is to write people’s names in stylish calligraphy. One person on the team assumes the role of calligrapher and the others as customers of the store.

To play the game, each customer takes a sticky note and writes his or her first name in small letters at the top of the card. The calligrapher takes each card and then transcribes that person’s name into whatever style of calligraphy the calligrapher uses. Of course, our store only gets paid when it completes a card – a customer won’t pay for a partial transcription of his name.

There are two rounds in the game. In round 1, our store has a policy: Never let a customer wait. So if all five of the customers were to enter the store simultaneously, then the calligrapher has to work on all five customer cards at the same time. This is accomplished by working “round robin” by having the calligrapher write one letter on each card and then moving on the next card to write the next letter of that person’s name, before moving on to the next card. Eventually all of the cards will be completed. 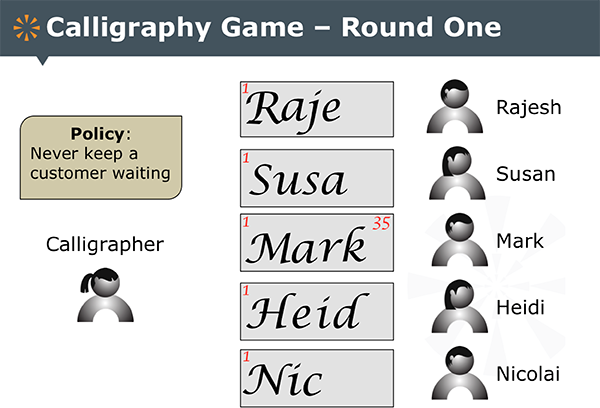 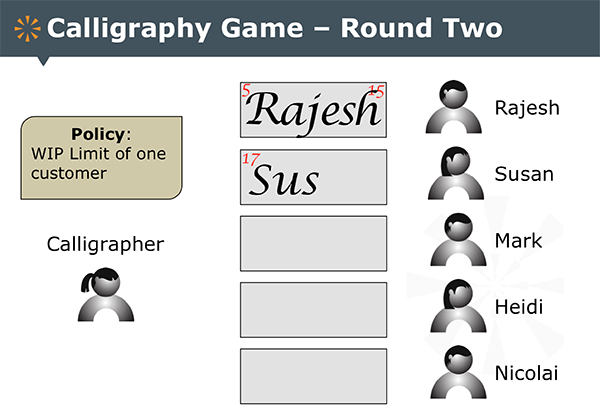 So, if five customers were to simultaneously enter the store they need to queue up. The calligrapher works on their cards in the order in which the customers appear in the queue. Like before the exercise is timed: When the calligrapher starts working on a card she writes down the start time and when she finishes working on card she writes down the completion time. And, like in round 1, at the end of round 2 the same two numbers are calculated: how long did it take to complete the first card, and how long did it take to complete all of the cards.

Also, remember, the store won’t get paid until a card is completed. So no team got paid any faster than 23 seconds in round 1. Every team got paid for their first card in round 2 in less than 10 seconds. Getting paid sooner is better because money has a time value – I’d rather get the $100 today than a $100 a year from now since I could reinvest the $100 I get today.

Let that result sink in. For example, Team 4 got all the cards completed in 27 seconds in round 2 whereas it took Team 4 a total of 52 seconds to complete the first card in round 1!

So that’s three benefits to establishing a WiP limit so far:

If those aren’t enough, then consider this. If teams make mistakes during this exercise they almost always occur during round 1 when the calligrapher is forced to multi-task, especially if the calligrapher is dealing with a name whose spelling is unfamiliar to the calligrapher. So in round 1, completion times take longer and work is done at a lower quality level.

So we can add a fourth benefit to having a WiP limit: Do higher quality work

Clearly working without a WiP limit is not the better choice!

Oh, if you are thinking that order of the rounds matter, I have done the experiment and changed the order where round 1 has the WiP limit and round 2 is working on all cards at once and the results are basically the same.

So, all these benefits accrue when we establish a limit on the number of things we work on at one time (a WiP limit)

OK, so we have now seen the benefits of having a WiP limit. The problem is that the teams that do the work rarely have any control over the amount of WiP at the project level. Executive management makes the decision regarding how many projects the organization will work on at one time. I consider this decision part of the organization’s portfolio management process (see Chapter 16 of Essential Scrum). And, based on how most people answer the earlier question (“Are you working on too many projects?”) executive management is pushing too much WiP onto the teams.

Saying Not Now To Stakeholders Is Difficult

A root cause of this problem (of pushing too much WiP onto teams) is that it is difficult for executive management to say “not now” to an important stakeholder – not now in the sense that the teams will not immediately start to work on a stakeholder project. If our internal marketing group has important needs, then they want us to address its needs now! If a salesperson sold a project to customize our software for a client, the expectation by the both the salesperson and the client is that we will start to work on that customization project immediately. Time is always of the essence, so “not now” is a difficult concept to embrace!

The solution is to prioritize the work that we ask our teams to perform and to not start more work than we have capacity to reasonable to do. But again, that requires the discipline to not work on something now – basically delaying when we start a project. And, since it is difficult to be an executive manager that tells stakeholders not now, we end up starting everything (or at least too many things). Somehow it is better to show progress on 40 projects at the same time, albeit very, very slow progress on all of them, then to stay focused on the highest priority projects that match our teams WiP limit (say 15 project) and make really impactful progress.

The difficulty here is that the argument for why we should not work on everything at once is very counter-intuitive and therefore hard for many people to believe is true.  Here is the argument that would need to be made:

Stakeholder: “I really need to you get my project done immediately.”

Executive: “Understood. However, we won’t be able to start your project for three months. But, don’t worry. We will actually get your project done faster and at a higher quality level if we wait three months to start it than if we started it today.”

Stakeholder: “How can you possibly get my project done sooner if you don’t start working on it for three months?”

Executive: “Because our teams are currently working at capacity on the highest priority work and when they finish that, we will swarm the necessary teams on to your project. That way, they can stay focused and get yours done quickly with their full attention and therefore higher quality than if we just throw your project into the current mix and start working on it. Doing that would just slow everything down, including your project, and lower overall quality.”

I hope you can appreciate the difficulty on the part of executive management trying to have this conversation with a stakeholder.

It sounds completely counter-intuitive to say we will delay starting your project now and actually get it done sooner.

The Fallacy of Faster Completion if We Start Sooner

As counter-intuitive as it sounds, the Calligraphy example should have you convinced why waiting to start a project often will get it done sooner and at a higher quality level. Harken back to the Calligraphy exercise. In round 1 we showed progress on all cards at the same time (albeit slow progress). So in round 1 we never had to say “not now” to a customer / project. If another customer walks into the store, we just start working on that customer’s card / project immediately (remember, we never let a customer / project wait during round 1).

And, as we saw, the results of too much multi-tasking were disastrous. Overall we slowed all work down and did it a lower quality level. Remember, all teams completed all of their cards / projects faster (in several cases many times faster) in round 2 when they had a WiP limit than they did in round 1.

But perhaps your thinking, “Sure, but a stakeholder will say, you may complete everything faster, but if you don’t work on mine now you will complete mine slower, and I don’t care about the other projects.” Well, then I you refer back to the results of Calligraphy once more where more than half the time the teams were able to get everything done in round 2 before they got anything done in round 1.

So, in fact, we will almost certainly be able to get each individual project done faster, even if we delay when we start working on it. Remember, even the fifth person in queue during round 2 had to wait his turn before the calligrapher started on his card and he still got his card completed faster (more than half the time) than anybody got their cards in round 1!

Let me summarize. Companies are working on too many projects at the same. One root cause of this problem is that executive management never wants to tell a stakeholder “not now” to her request to start a project for her. The reason is that argument for delaying her project’s start is very counter intuitive – if we adhere to our organization’s WiP limit we will actually get more work done in less time at a higher quality even if that means delaying the start of work on your project, which we will almost certainly finish faster if we don’t start it right now! My suggestion, if you are having a hard time convincing people that the WiP-limited approach is correct, is to have them do the Calligraphy exercise!