Growing up I used to watch reruns of the TV show Hogan’s Heroes, a comedy about a fictional Nazi P.O.W. camp (Stalag 13) that houses prisoners who assist the Allied war effort from within the camp.

In Season 2, Episode 8, “A Klink, a Bomb, and Short Fuse,” an unexploded Allied bomb lands in the middle of the camp. There is a scene in this episode where the bumbling Col. Klink, commandant of Stalag 13, the resourceful Col. Hogan, the ranking Allied prisoner, and the loveable, teddy-bear-like Sgt. Schultz are attempting to defuse the bomb. 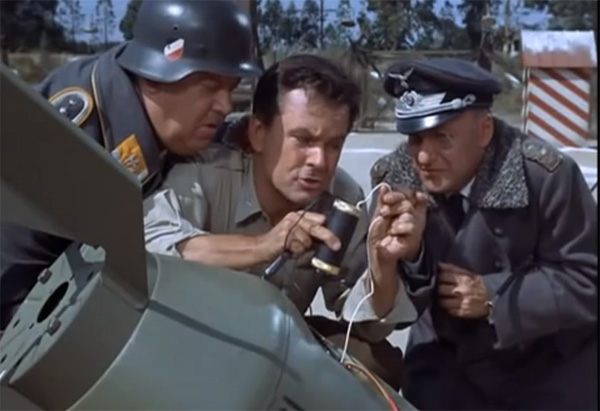 The dialog at the point in the above picture is:

Hogan: “One of these wires disconnects the fuse and the other fires the bomb. Which one would you cut Shultz?”

Schultz: “Don’t ask me, this is a decision for an officer!”

Klink: “This one.” (points to the white wire)

Hogan then cuts the black wire!

Klink: “If you knew which wire it was, why did you ask me?”

Hogan: “I wasn’t sure which was the right one, but I was certain you’d pick the wrong one!”

I don’t claim to be an expert in the inner-workings of the human brain. I do however pride myself on being a thoughtful observer, and over the course of my life I have met people who seem to have really good intuition about certain topics. They seem to always just know intuitively which is the correct wire to cut.

I’m not referring to expertise (something that can learned over time), but instead something more intrinsic to the individual. For example, I expect people who spend years studying bombs to acquire the expertise to know which is the proper wire to cut. However, the fact that they are experts does not necessarily mean they have good intuition.

In the 1996 movie Twister about storm (tornado) chasers in the U.S. Midwest, there is a scene that makes this point. In the scene the lead storm chaser (Bill Harding) makes the following comment about a competing storm chaser (Dr. Jonas Miller):

“…He's in it for the money, not the science. He's got a lot of high-tech gadgets, but he's got no instincts.”

In a later scene Jonas, the Ph.D. (expert), proves he has no instinct/intuition when he fails to properly intuit the path of a tornado, which changes directions and swallows up his vehicle killing him and his driver.

So how does all of this apply to agile development?

Over the years I have taught more than 300 Scrum classes. My classes are largely based on dialog, where I ask questions and students either in small teams or as an entire class discuss the questions. So I get to see how participants approach a given situation by the way they discuss a topic. Some people just seem to have a better intuitive grasp than others of core agile principles and how they can or should be applied.

What brought all of this into focus for me (and prompted me to write this blog) was the following situation. About six months ago I taught a class for a company that was preparing for its first Scrum development effort. At the end of the class the executive whose department would be using Scrum met with me to debrief on the class and gather any insights I learned during the class that he could leverage as they geared up for development.

During our discussion he asked me the following question: “As you know, Jackie is going to be our first ScrumMaster, what are your impressions of her?”

Jackie was a very vocal participant in the class, which was great. Unfortunately, Jackie had pretty much zero agile intuition. Every time I asked a question it was almost a certainty that Jackie would give the most non-agile response you could imagine. From my perspective, she clearly passed the Col. Klink test. Meaning if you weren’t sure what to do in a particular situation, then just ask Jackie. Then, immediately do the opposite of whatever she suggests, and you will probably have a good agile solution.

In response to the exec’s question about Jackie I started telling him about that scene in Hogan’s Heroes that I described above. He started laughing; it was clear to him that I was equating Jackie with Col. Klink. He then remarked that Jackie had historically led projects in his department so she was the obvious choice for ScrumMaster and went on to say it wasn’t clear who else would be ScrumMaster if she wasn’t. I warned him again that, based on her observed agile intuition (or lack thereof), I would not assign her to be the ScrumMaster—I thought it would be unproductive.

I then asked him why Robert wasn’t being considered. Robert was in the same class and showed great agile intuition. He would often answer a very nuanced question with great insight. In addition, he seemed to have very good people skills and several other characteristics that would qualify him as a candidate for ScrumMaster. I told the executive that I would be much more inclined to invite Robert to be the ScrumMaster.

Fast-forward about six months from this discussion and I am on the phone having another discussion with the same executive. Despite my suggestion, they moved forward with Jackie as ScrumMaster. Not surprisingly, the exec was describing the less than desirable results they had obtained and a number of unfortunate (and likely avoidable) situations that had taken place. These were likely situations that a good ScrumMaster could have helped address.

He shared that because of this, they eventually decided to move Jackie off the Scrum development work to be a project manager in a non-agile area of the company. And, they had assigned Robert to be the ScrumMaster. Robert’s area of expertise was QA, which I believe is why they mistakenly did not originally consider him for the ScrumMaster role. Based on what the exec said, it appeared that their agile efforts were now starting to move in a positive direction (the jury is still out on their latest development effort).

As I started to think more about the situation at this one company I realized that the Col. Klink test for agile intuition is one that I had been unconsciously applying for years. More often than not it has provided useful insight into a person’s capability as ScrumMaster.

What is your experience? Have you noticed anything similar with regards to agile intuition? Leave a comment so we can discuss it!